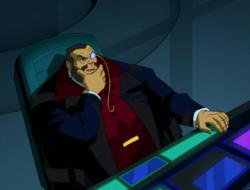 Darius Dun is the uncle and guardian of Cody Jones, who served as the C.E.O. of O’Neil Tech in Fast Forward.

During his time as C.E.O. of O’Neil Tech, Darius utilized his nephew’s company for a variety of illicit purposes. Although the full extent of his operations is thus far unknown, Darius has, throughout the series, shown to have a network of cameras to spy on Cody (including one on Serling); employed private soldiers, first with theInuwashi Gunjin and later on with cloned versions of the Turtles; run a weapon-production and smuggling operation (prohibited under O’Neil Tech’s charter) kept under the guise of a recycling program; supplied criminal groups such as Triceraton gangs with said weapons; and perhaps most importantly, stolen plans for Cody’s time window. He has also established a resource-sharing alliance with the alien warlord Sh’Okanabo, who supplied him with the evil clones of the TMNT in exchange for the time window plans.

The Turtles, who never trusted Darius because of his shady nature, were hard pressed to expose his criminal activities, since his position and cunning allowed him to remain clean.

After being exposed by Cody and the turtles that he was in fact making weapons, he dropped his innocent façade and decided to openly face them when they had found out the truth. Even with more firepower, Cody managed to defeat his Uncle using his Turtle Xarmor while the turtles defeated their dark counterparts once more.

He is seen hiding out with the Dark Turtles after this, as they rescued him after being defeated by Cody. He sees them merely as his minions though, easily controlling them using his battle armor as well as having placed hypnotic suggestions in them so they can’t hurt him physically.

In an attempt to finally finish off Cody, Darius took control of Turtle-X with a Trojan Horse Virus he installed while searching through Cody’s database. He captured Cody inside his own machine and tortured the young boy by having all of his artifacts destroyed. However, Splinter and Raphaeltracked his location and with his armor damaged, Darius had the Turtle-X go on a rampage until it overloaded but the process was stopped by Serling who uploaded the anti-virus program into himself and fought to install it into Turtle-X, becoming severely damaged due to this.

Unfortunately, due to the cancellation of the second season of Fast Forward, he was never officially taken down, but many presume in the gap between Fast Forward and Back to the Sewer he was defeated and possibly imprisoned.