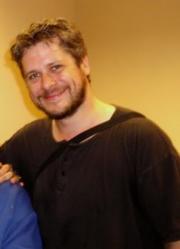 Dan Green (born February 7, 1975) also credited as Jay Snyder, is an American voice actor for the 2003 animated series and Back to the Sewer who does “additional voices”. He also voiced “88 Leonardo” in Turtles Forever. He is best known as the voice of Yugi Muto from Yu-Gi-Oh!, Trudge from Yu-Gi-Oh! 5D’s, Knuckles the Echidna in some of the Sonic the Hedgehog video games (including the anime series, Sonic X), and is also known for his script adaptions of Kurokami: The Animation and Mobile Suit Gundam Unicorn.