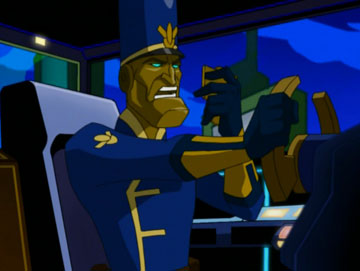 Constable Biggles is a gold-plated robot and the Chief Constable of the Peace-Keepers, the police force of New York City in 2105. He appears in the Fast Forward series.

In the first episode Future Shellshock!, he reveals his full title is “Constable Alluisious Biggles”

Character Biography
Constable Biggles seems to be the generic British stereotype of the series, often saying “Ello Ello Ello!” often followed by “What’s all this then?”

As Chief of Police, it is his job to enforce the law and believe in as well as follow the 3 P’s: “Paperwork, Proper Procedure, and Punctuality” (as stated in “Future Shellshock!”) that grease the wheels of society. Although, when the opportunity to make things easier for himself arises, he will happily take it, commenting something like “Less paper work for me then”.

Because of this, he often ends up running into the Turtles, usually accompanied by Cody Jones, as they are generally involved with all the mayhem occurring at the time, as they accidentally create a lot of it during their many adventures. Despite all the trouble they cause him, Biggles has yet to arrest the Turtles as they often escape while he’s rambling on to himself about what they’ve done. But because the turtles disappear to avoid being arrested, Constable Biggles often takes the credit for capturing all the villains they have taken down, sometimes resulting in him getting medals.

He has also been known to enlist the aid of Turtle Titan II with some cases (as mentioned in Clash of the Turtle Titans).