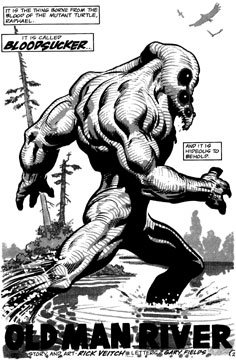 First Appearance: Down to The River

Bloodsucker is an enemy of the Teenage Mutant Ninja Turtles from the original Mirage comics. This creature was created partially by the blood of Raphael. It feeds on human blood. It sucks blood through its hands and has great strength and the ability to mutate things because of the mutagen from Raphael.

Mirage
Volume 1
Bloodsucker was a normal leech until Donatello, Leonardo and Michaelangelo decided to use it to get back at Raphael who had been disobeying Splinter and stalled their training. Raphael was afraid of leaches so the other Turtles decided to force Raphael to let the leach suck on his blood. Bloodsucker sucked some of the mutagen out of Raphael and Raphael started to de-evolve back to a normal pet turtle. Bloodsucker started to evolve into a human-kid-of-a-thing. Later Bloodsucker sucked the rest of Raphael´s mutagen. The other Turtles decided to capture Bloodsucker so they could get the mutagen back to Raphael. Finally they found Bloodsucker and started fighting it. During the battle Raphael (who looked like a normal pet turtle at this point) started biting Bloodsucker thus draining the stolen mutagen back. After a duel between them, Raphael had gained back all the mutagen from Bloodsucker and was back to his former self. Bloodsucker had also transformed back to a normal leech which Raphael freed back to the river it had come from.