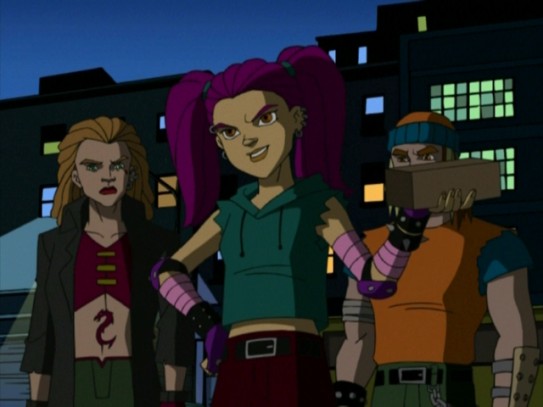 Universe: 2K3 Series, Back to The Sewer

Angel is a character from the 2003 TV series. She has a brother named Ryan.

Biography
Angel is a youth from Casey’s neighborhood. Although Casey promised her grandmother that he would look out for her, Angel has been getting into all sorts of trouble. She eventually became captivated by the Purple Dragons around the neighborhood and followed them in hopes of joining their ranks. During one of her “initiations”, which was a robbery,

Casey and the Turtles showed up to prevent them from getting away. Casey was stunned to find Angel among the thieves and tried his best to discourage her from joining them, but Angel ignored him and ran off. Although she escaped, Casey was determined to make sure she didn’t join the Dragons. He infiltrated their hideout just as Angel was about to fight two Purple Dragon members. Casey stepped into the ring to take Angel out of there, but Hun stepped in and captured him. Guilt-ridden, Angel tried to free Casey from his prison but was unsuccessful. Casey told her to contact Raphael in the abandoned warehouse in Eastman and Laird. When she got there, she was surprised to find four humanoid turtles standing in front of her. They all infiltrated the Purple Dragon’s hideout and, after causing a ruckus, managed to escape with Casey in tow. Afterwards, she renounced her juvenile delinquent ways and became an ally to the Turtles.

Some time after, Angel burst into the lair begging the turtles they help her find her brother, Ryan,who had been gone for three days in an abandoned mansion, looking for gold coins. The turles and Angel encountered a legion of undead warriors, where an old man living in the mansion saved them. The four turtles went back down to conquer the creature that controlled the undead warriors, with Angel being forced to stay behind. The turtles eventually returned with Ryan.

Shortly after Karai became the Shredder, Leonardo contacted Angel and instructed her to fake a pizza delivery (due to members of the Foot keeping heavy surveillance on the location) to the Second Time Around shop, where April O’Neil worked, to ask where the turtles were. April wrote back amd Angel gave the note to Leonardo.

Later, when the Foot Mystics attacked the turtles through a dream, in it the Turtles were chased by Police, the Earth Protection Force, and the Foot, and it was suggested they contact Angel and ask for her help, though this led to the deaths of April and Casey.

Angel arrives as a guest to April and Casey’s wedding, and helped fight against the forces of Cyber Shredder. When he was defeated, Angel and others witnessed the wedding.