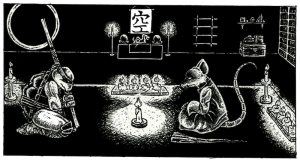 Lajud & Montelione’s BETWEEN THE LINES is an ongoing fan made collection of short comics based on the TEENAGE MUTANT NINJA TURTLES, characters created by the great duo of Kevin Eastman & Peter Laird.

Our stories are set within Mirage continuity and in the original veins of Eastman & Laird. We have worked carefully to not conflict with what has transpired in the world of Mirage’s TMNT – rather, we seek to offer glimpses of what might have went on “between the lines” of their universe. Concerning the artwork, Pedro is by far the best choice for such a task – his natural skills speak for themselves, and his originality in drawing the characters is, in my opinion, brilliant. We have worked incredibly hard to deliver an engaging TMNT product steeped in the original darkness of Mirage while adding some of our own unique spices. We hope that we have succeeded.

BETWEEN THE LINES will be available for online download in PDF format.

DONATELLO: DARK ENERGY (PART I) is the first of a series of shorts centered around my favorite Turtle, Donatello. Part I of “Dark Energy” takes place during Mirage Volume 1, issue #2, during the “several weeks” that pass (pg. 7) – much before the TMNT first met and rescued April O’Neil.

“Dark Energy” will focus on Donatello’s inner turmoil as he grows up knowing the vision that Splinter explained to him – and what he will ultimately attempt to do in light of an uncertain future. Spanning a series of shorts, “Dark Energy” will also briefly explore (amongst other character aspects) Donatello’s burden of being the unofficial “second-in-command” to his brothers, his love of science over martial arts, and his relationships with individual family members. We have paid homage to other future Donatello stories in our own, and some of you might be able to point them out.