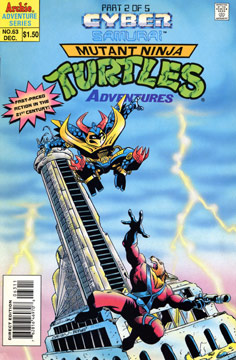 Back at Turtleco, the brain “wakes up” and views scenes on the Time-Slip Generator of Berlin being bombed by the allies back in the 1940s.

Meanwhile, a boat is attacked by three heavily armored bandits. The guards onboard are severely outgunned and one is killed, but the Cyber Samurai Turtles arrive and defeat the exo-suited murderers – who mysteriously give off no signs of life when scanned. Don unmasks one to reveal a rotting, zombie face.

Verminator X is viewing the scene on a monitor in his spacecraft and vows vengeance against the Turtles for thwarting his plans yet again.

The Turtles split up to see if they can find any clues. As Mike flies through the air, Verminator X leaps from a building and lands on his back. The futuristic feline attacks Mike with a fervor, removing his exoskeleton and beating him senseless. As the villain is about to finish the Turtle, a strange creature arrives and tells X to accompany him.

Raphael is flying low patrol when a spaceship erupts out of the waters, nearly colliding with the ninja. Raph calls Mike and asks him if he can see the ship – but he gets no reply. Fearing the worst, our hero zooms off to find his brother.

Back at Turtleco, Don suspects Verminator X or Thanotics are behind the robberies of NASA parts. The two head towards the room housing the Time-Slip Generator and are shocked to see that it’s on again and still showing scenes of Nazi Germany. Suddenly, Raph arrives with the body of Mike and announces that the fallen Turtle is not breathing…