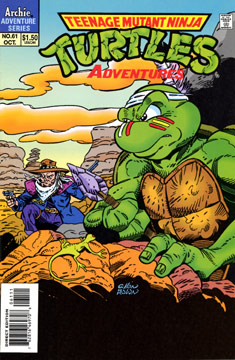 The TMNT, Splinter, Ninjara, Candy Fine, Kid Terra and his friends gather in the desert to place a headstone for Slash, who sacrificed his life to save his friends and the planet Earth from the evil alien Maligna. Raph goes off to brood and Future Raph joins him. Raph asks what will become of Ninjara and him, but Future Raph refuses to give details. On cue, Ninjara arrives and three sit together as the sun sets.

The others have built a fire and are seated around it when a portal opens up. Future Mike, Future Leo and April’s future great granddaughter, Nobuko, jump through. Future Don and Future Raph are happy to see their future siblings (man, is this confusing or what?) Leo reveals that Nobuko is one of his students, and the girl gives April a big hug, thrilled with the chance to meet her ancestor. Future Don discovers that while their past has been altered, the future is unchanged – meaning that mankind brought on the flooding caused by global warming – and that the Mutanimals premature deaths were in vain. Kid Terra is shocked to hear that the Mutanimals were slain. Future Leo explains that in his past, it was Maligna who had killed the Mutanimals, surmising that their deaths were “their destiny… or something.”

In the morning, Master Splinter and the janitor from last issue are doing their morning meditations and speaking to one another telepathically. The Future TMNT and Nobuko open a portal and go back to the future. The janitor then tells the Turtles the creation story he learned from his tribe, the story of how life began on the back of the gigantic Turtle Island.