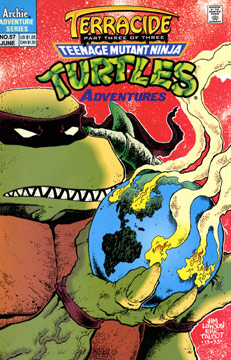 Our heroes arrive at the dark side of the moon and discover Maligna’s hive-world ship hidden in orbit there. A dogfight takes place and the Mutanimals’ ship is destroyed!

On board the Hive-World, Maligna gloats over her victory with Null. We then discover that Future Don had used his portable Time-Slip device just in the nick of time to transport everyone onboard Maligna’s vessel. The group explores the giant ship and soon find its organic heart, which Slash attacks. Maligna sends her forces to defend the Hive-World and a gigantic battle takes place. Eventually the TMNT win the fight and they head for the control room to capture Maligna and Null – but they learn that the ship has taken too much damage and is now plummeting towards the sun! The TMNT rescue Candy and run towards an escape pod as Maligna and Null prepare to attack. Slash stays behind to give his friends time to escape and finish off their enemies.