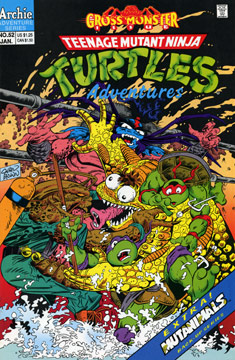 McIntyre and his assistant Squint have followed April to the sewers. Beneath the streets, April, Oyuki, Don and Raph investigate a bizarre, organic mass of unknown origin. April explains that she and Oyuki had come down to investigate a series of gold and jewelry robberies when they stumbled upon the object. While our heroes explore the area, Raph finds a life-sized crystal rat. Donatello discovers that the mass is a series of membranes, like skin. As he prods into the mound with his staff, he discovers a stockpile of gold bars. Something in the darkness is watching them…

Elsewhere in the sewers, McIntyre and Squint are searching for April and the Turtles when they come upon the area where Wyrm and Scumbug had fought (way back in issue #10). The men discover a weakened Scumbug, who sits in the water immobilized by hundreds of little wyrms that are sucking the life out of him. Scumbug pleads with the men to get the wyrms off of him. Upon spotting the humans, the little wyrms begin to coalesce and form into one giant monster – the one known as Wyrm (who else?)

April and the Turtles are attacked by a weird spider-headed beast calling itself Toxzeem, who demands that our heroes drop the gold and get away from its ship. Oyuki records the events on her video camera as April excitedly directs her to keep the lens off the Turtles as much as possible.

Free of the mini-wyrms, Scumbug leaps to his feet and attacks Wyrm. McIntyre excitedly directs Squint to get the battle on tape.

Toxzeem pulls a laser pistol out and begins firing and Don and Raph, who retreat deeper into the sewers with Arpil and Oyuki in tow.

Wyrm tells Scumbug to stop his attack, as he was only doing what he needed to do to survive – just as Scumbug would have done if their roles were reversed. Wyrm then points to the two reporters and states that they’ll make a swell dinner for the two monsters. McIntyre and Squint run away in terror, the beasts close on their backs.

Both groups collide with one another in an intersection. Toxzeem clashes with Wyrm, who deems the alien a tasty morsel and asks Scumbug to help him take it down. As the creatures close on the alien, Toxzeem fires his gun at them, turning both into crystalized statues. Raph throws his sai and it pierces the pistol, destroying it. Weaponless, Toxzeem runs away. The Turtles chase their adversary, but he makes it to his ship and blasts off before they can stop him.

April, Oyuki, McIntyre and Squint arrive. Raph takes Squint’s camera and breaks the tape over the man’s head. Donatello screams at McIntyre to leave the TMNT alone – that he’s way over his head getting involved with them, as he could have easily died tonight. The Turtles and their friends then stalk off.

McIntyre states that the night isn’t a complete bust – at least they have the crystalized Wyrm and Scumbug to do a show about – but as they try to move the bodies, the crystals shatter into millions of pieces.