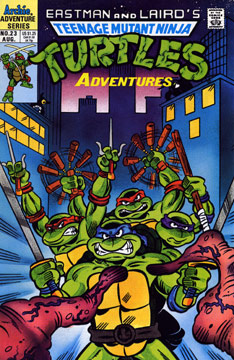 “Search and Destroy”
The TMNT are enjoying Donatello’s latest creation – a sewer hot tub. April decides that bathing in warm sewer water isn’t anything that she’s interested in doing and heads off to stand watch. Raph explains that Cudley the Cowlick brought him home after his outer space adventure with the Mighty Mutanimals.

Meanwhile, in Dimension X, Krang discovers an unexpected ally on Morbus, the garbage world where he’d been banished to by Cherubae.

Back on Earth, April discovers an approaching intruder – who turns out to be Master Splinter. The Sensei tells O’Neil that it’s time for her next lesson, and he admonsihes the TMNT. Splinter’s not happy that his four mutant students are lounging about. The riled rodent orders the Turtles to get busy finding the Shredder before anything else terrible happens. Raph is happy to be proactive, but the Sensei reminds him that he needs to work with his brothers rather than on his own.

Slash demands that Krang help him find his palm tree – or die! The brainy alien quickly surmises the circumstances and promises to take Slash to a world filled with palm trees, and thus Krang has found his next minion. The two set off together and Slash explains that he was sentenced to a prison term on Morbus – as many other unsavory characters have been. The toxicity of the place usually kills prisoners, but some can survive in the environment.

As the Turtles transverse the sewers, they come upon a group of men who are assembling a bazooka.

Back on Morbus, Slash and Krang spot a landing spacecraft. As the villains close to investigate, two armed guards escort a chained prisoner named Bellybomb off the ship. The guards read Bellybomb’s long list of offenses and ask him if he has any last words before they abandom him on the toxic planet, to which the cosmic criminal replies, “You neglected to mention my unpaid parking tickets.” Krang is most impressed with the toothy alien.

The TMNT discover that the men in the sewer plan to use the bazooka to fire a missile through the street and into an armored car’s vulnerable underside. The Turtles launch an attack on the would-be thieves.

Slash attacks the guards holding Bellybomb and the two criminals charge into the ship to battle the remaining law men. Krang looks on happily and as he crawls towards the craft, decides that it’s time to find a new body.

The Turtles easily defeat the well-armed bandits and tie them up, while the villains in Dimension X commandeer the prison ship and set a course for Earth.