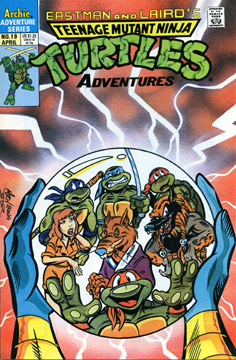 “The Man Who Sold the World”
Leo, Mike, Don and Mondo are enjoying the view high atop a New York skyscraper. Donatello is studying the building with the familiar logo and pondering what the strange meteors that had been floating around it could have been when April and Master Splinter arrive. The Sensei states that Raph is on his way. O’Neil announces that Splinter has begun to teach her how to use a katana and that the pair have been investigating the owner of the building that Donatello was wondering about. April states that the news is not good – the skyscraper is owned by a businessman named Null, a fellow who owns numerous nefarious corporations, like the one that had enslaved the locals back in issue #15 as well as the group that was dumping toxic waste into the sea in issue #16. Our heroes begin to ponder what other evils Null has his fingers in…

Meanwhile, Mr. Null is negotiating with the buggy Skul and Bean. The aliens are unhappy with Null’s proposal that a contract must be signed and state that their Queen Maligna’s word is enough. The pair then reveal how they had disguised their ship as a meteor and followed Cudley the Cowlick across the universe to the planet Earth, where they met Null. The bogus businessman dictates the terms of their agreement: Null wants Maligna to give him the means to take his businesses off-planet and in return he will give the bugs the Earth. Maligna’s ambassador agrees to the deal and shakes hands with the crooked capitalist. Skul and Bean state that Maligna is on her way to the planet.

Meanwhile, Man Ray is swimming with some dolphins when he discovers a strange array of meteors on the floor of the ocean. When the mighty mutant investigates, one of the asteroids springs to life and crashes into his chest, carrying him out of the sea and high into the sky at tremendous velocity.

Soon enough, the meteor comes crashing down onto a beach – that’s inhabited by Jagwar and Dreadmon! Ray is dazed from the crash, but recovers quickly – as does the asteroid, which begins to crack apart.

Back in the Big Apple, April, Splinter and Don are trying to come up with a plan on how to get inside Null’s headquarters when they’re interrupted by The Kid – who holds them at gunpoint. Fortunately Raphael shows up and knocks out the Kid. As everyone congratulates Raph for his quick take down, Skul and Bean arrive and a battle ensues. Our heroes have a hard time as the bug’s body armor is tremendously durable. Eventually Bean launches a stink bomb out of his skull, which creates a noxious cloud that knocks out our heroes. As the aliens congratulate each other for a job well done, Mr. Null arrives and reveals his true form – that of a devil!

This issue is continued in Mighty Mutanimals Mini-Series #1