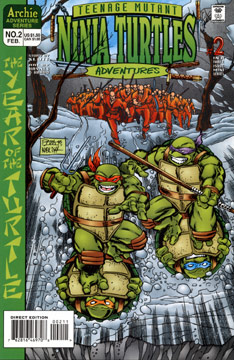 The next evening, Splinter (now in human form), begins telling the rest of the bedtime story to the boy…

The TMNT have journeyed to Tibet and have found the Temple of the Thirteenth House, where they hope to retrieve the third talisman before Shredder gets his hands on it. The Turtles sneak into the fortress… but so has Shredder’s minions, Psonic and T.K.O.

Meanwhile, Shredder and Cyberius arrive at a spot in the Kyrrannian Desert where the millennial alignment will take place. The area is heavily guarded by soldiers and tanks, so Shredder activates the power of his two talismans and becomes super-powered. The villain then attacks the army and makes short work of the soldiers and their weaponry.

Inside the temple, the Turtles are caught in various traps, but they all escape and manage to find the room housing the final artifact. Before the mutants can grab it, T.K.O. and Psonic arrive. T.K.O. uses her telekinetic powers to snatch the talisman while Psonic uses his abilties to create energy-powered musical instruments that he uses to attack the Turtles. Psonic blasts a hole through the wall trying to take out Raph, which alerts the temple guards. The villains make their escape in a bubble that T.K.O. creates, leaving the TMNT behind to face the angry guards. The mutant terrapins flee by Raph and Don using Leo and Mike as makeshift sleds, and they slide down the snowy mountain in pursuit of Shredder’s underlings.

The TMNT catch up to their adversaries and Mikey manages to surprise T.K.O. and Psonic with some well thrown snowballs. The woman drops the artifact, and she and Mike scramble through the snow to retrieve it – they both grasp it at the same time, and a powerful explosion rips into the air, sending both flying. The remaining Turtles rush to their brother’s side, only to discover that the power from the talisman has caused him to revert back to his original turtle form!

Splinter then tells the boy that the story is over for the night.