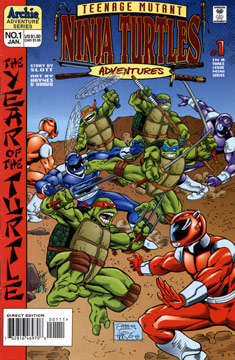 The story begins with an Asian man telling a boy a bedtime story that he entitles “The Last Turtle Story.”

Shredder discovered that an artifact of unimaginable power was hidden in the heart of a lost jungle, so he and some Foot Soldiers went to steal it. The artifact was protected by a tribe who had successfully beaten all of the Foot Soldiers, but Shredder was undaunted by this and demanded the talisman. The chieften laughed at the ninja master, and thus Shredder single handedly defeated all of the men guarding the artifact and tossed the chief from the top of the pyramid that housed it.

In New York City, Raphael is hanging street punks off the ledge of skyscrapers to coerce information about the Three Green Talismans of the Thirtennth House. None of the thugs know anything about the artifact and Raph heads back to his home in the sewers where he’s greeted by Master Splinter. Raphael tells his Sensei that none of the punks in the City knew anything about the magic item, and Splinter explains that few are aware of the mysterious thirteenth symbol of the Chinese animal zodiac… the turtle. Apparently the Year of the Turtle only occurs once per millenium, and this is that year. Splinter also explains that the Three Talismans of the Thirteenth House, when joined together, will give an individual untold power. As the two mutants arrive in their lair, we discover that Donatello has been searching the net without finding any leads, but Leonardo managed to find some scrolls in the library that say the Talisman they seek might be in Tibet. Mikey is busy “scanning the media for possible leads” by watching the Power Raiders TV show.

April comes on the TV screen and reports that the Power Raiders will be making an appearance at Radio City Music Hall, and oddly enough, Leonardo spots one of the three talismans of power on the White Power Raider’s belt. The guys head off to investigate, but not before Don updates his web site to let his friends know they’d found a clue.

Unfortunately for our heroes, Don’s web site is being monitored by the Shredder’s techno flunky, Cyberius, who tells his boss that the Turtles have located the second talisman and are on their way to Radio City Music Hall. We also meet two other minions, a female with telekinetic powers named T.K.O. and a muscular man named Psonic. To make matters worse, Don left his modem on which allows Cyberius to trace the exact location of the Turtles’ lair. Shredder sends the trio to fetch the second talisman while he heads to the sewers to face Master Splinter.

The Turtles arrive at Radio City Music Hall and demand the talisman – the Power Raiders tell them to buzz off, and the TMNT attack(?!). After easily defeating the actors, the Turtles face the White Power Raider, who activates his belt and begins to crackle with cosmic energy.

Back at the TMNT lair, Shredder arrives and attacks Master Splinter. Meanwhile, the White Power Raider is giving the four TMNT all they can handle, thanks to the powers he’s receiving from the talisman. Don muses how difficult a foe he would be if he knew ninjitsu. Speaking of which, with the power of the artifact he stole from the jungle, Shredhead quicky defeats Master Splinter with a cosmic punch. As Saki reads over the scrolls Leo had found, Splinter makes his escape. This enrages Shredder, who vows he will rule the world when he has all three talismans.

Back at Radio City Music Hall, the White Raider attacks Leonardo, who uses his katanas to cut the actor’s belt off. Without wearing the artifact, the Power Raider is just a normal actor – who Leo head butts and knocks unconscious. As the TMNT congratulate Leonardo, T.K.O. uses her telekinteic powers to grab the belt from under their noses. The crowd gets ugly due to the Turtles attacking “America’s favorite TV heroes” and they head dejectedly back into the sewer.

When the TMNT get back to their lair, they are met by an Asian man in Splinter’s robe – as it turns out, the energy from the talisman changed Splinter back into Hamato Yoshi!

To end this issue, we see the same Asian man back in the bedroom that the story began in. Yoshi tells the boy that this bedtime story is finished for now.