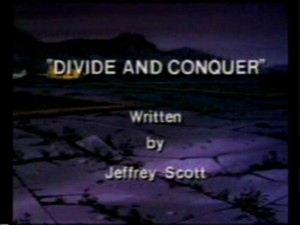 SYNOPSIS:
The last episode opens with the Turtles fighting a scaly alien. When the TMNT move over to him he reaches up and tears off Leonardo’s belt buckle and disappears.
In the next scene we see the alien appear at a cantina on a strange planet. Dregg is holding court at the cantina. He guarantees power and wealth for anyone that survives 90 seconds against the TMNT.
In the Turtle Van the TMNT are puzzling over what has been going on that week. Michaelangelo discovers a transmitter in his shell and before he can toss it out the window another alien appears and attacks them. The blue alien grabs Donatello’s bo and disappears.
Back at the Black Hole planet, Mung feels that Dregg is going crazy with his obsession to destroy the Turtles and forgetting their original goal to conquer Earth. Dregg is definitely going mad! Dregg tricks the five aliens that fought the Turtles and absorbs their energy and power into his body. Now that Dregg has stolen the abilities of the five alien creatures, he believes that he’s ready to attack the TMNT!
A fierce battle ensues, with Dregg using the different alien attributes to attack the Turtles. They try to stop him but fail. The TMNT retreat and figure another way to handle the super-powered Dregg. In the meantime, Dregg decides to kidnap April.
Donatello recalls that Krang’s old android body was extremely powerful. They have to go through the portal to Dimension X and retrieve it. Michaelangelo is sure that they will be able to defeat Dregg with it.
Eventually our heroes catch up with Dregg. Donatello causes the android bodysuit to make a swift ninja move and grab Dregg in a martial arts hold. He and Michaelangelo dive out of the suit just as it shrinks down, all the while holding Dregg. The shrinking suit crushes Dregg down to normal size. The villain is weakened from the battle, and the five aliens de-morph and emerge from Dregg’s body. Donatello drains the evil energy from Dregg and it leaves Dregg even weaker and frightened.
The Turtles throw Dregg and the aliens through the portal leading to Dimension X. A second later the portal closes up and Dregg is gone forever!