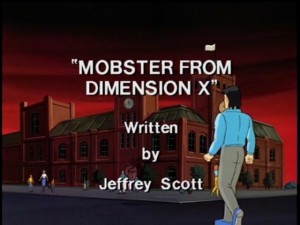 SYNOPSIS:
Dr. Alvin Huxley is demonstrating his breakthrough: THE PROTEIN COMPUTER. Not only does it think as fast as the human mind, but it can be linked to the human brain. The Professor demonstrates by dramatically connecting his own brain to the protein computer and controlling the entire City’s traffic signals and subways.
Donatello and the Turtles are watching the lecture from the roof. Suddenly gangsters burst into the lecture hall and attempt to grab the Professor. The Turtles drop through the skylight and battle the gangsters. They save the Professor and his protein computer and chase the gangsters off.
At the gangsters hideout we see that their boss is the Globfather, a large slimy green amoeba in a pinstripe suit and fedora. The Globfather slimes the lead gangster for not getting the protein computer. His green slime covers the gangsters’ body, transforming him into a green, shapeless blob that oozes across the floor.
The Globfather reveals that he is here on Earth to get the protein computer for someone who is willing to pay dearly for it.
The gangsters arrive at the Professors lab where he is working. His son, Ronnie, is there playing with his radio controlled car. The gangsters enter dressed like guards. They say they are taking him to a safe place. The professor realizes that they are lying. He hides the small protein central computer brain inside his son’s car and stuffs the car into his son’s backpack.
Meanwhile the Turtles arrive and battle the gangsters.The Turtles think they have the Globfather when suddenly he turns into a sticky mass and escapes down a drain. In all the commotion, Ronnie has grabbed his backpack and run away after he saw his father being grabbed by one of the gangsters.
The gangsters find out that Ronnie is the person they need to find. They leave the Professor tied up and take off to get the boy. The Turtles save Ronnie but the gangsters grab the protein computer from the car.
The Globfather commands Professor Huxley to attach the protein computer to the master phone switching computer. Next the Globfather plugs his own brain into the protein and links his mind with the computer. He can now telepathically control any computer equipment that is connected to the phone lines, anywhere in the world. We also find out that it is DREGG he is working for!
Dregg arrives and takes over from the Globfather. He gets control of a satellite targeting system and beams messages around the globe demanding the governments of the world give him control of the planet.
Meanwhile Donatello constructs a helmet which will hopefully allow him to cut off the Globfather’s control. Dregg and Donatello have a battle of the minds. Leonardo links to the Dreggnaut’s computer and activates the transporter. An instant later Dregg and the Globfather are gone.