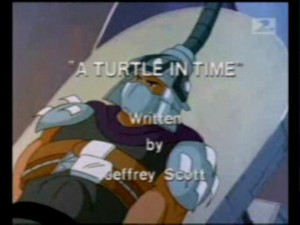 SYNOPSIS:
Shredder cuts through the wires attached to his head with the blades on his sleeve and escapes. Dregg drains the power from the Turtles and Krang then realizes that Shredder is not there.
Dregg now possesses all of their mental and physical strength. He can even see their memories and possess their ninja skills. All of them! Dregg and Mung exit and Shredder climbs out from under one of the surgical tables, where he has been hiding. He shuts off the forcefield around Krang and they leave.
April contacts Carter with the Turtle Comm.
Dregg is insane with power. He is shaping a plan on conquering the universe with his new powers, but Shredder has taken the chip that will allow him to complete his plans.
Carter reaches the Turtles and April and attempts to free them, but Dregg shows up and Carter has to get away. Carter goes back to the Turtles’ Lair.
April dupes one of the bat-men into thinking that she can’t breathe in the cell. She knocks him out and shuts off the forcefield from the Turtles. They are all in a very weak condition.
Back at the Lair, Carter gets in touch with Landor and Merrik, asking them to help him go back in time and bring the Turtles of the past back to the present. Merrik warns Carter that if they do not return the past Turtles to their normal time within 24 hours, both the past and present Turtles will cease to exist.
In the meantime, Shredder gives Krang a life-energy transfusion and he gets his strength again.
Four confused “past” Turtles are escorted by Carter, Landor and Merrik to find the “present” Turtles. Before encountering the “present” Turtles, Carter is discovered by Dregg. Carter mutates! Dregg escapes! Carter demutates!
The four “past” Turtles carry their twins into the Transporter room. Carter moves to the control console but before they can all be transported they are stopped!