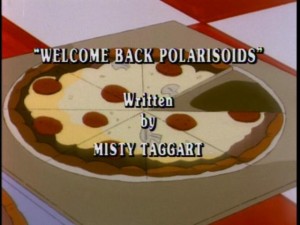 When the Polarisoids locate the surprised Turtles, they have no choice but to invite them back to their lair. On the way, Shredder arrives and steals the Polarisoids camera. He inserts Krang’s “tampered” tape and unleashes an alien monster which, true to form, attacks the Turtles.

Shredder, Rocksteady and Bebop cause havoc throughout The City when they unleash more and more alien monsters with the Polarisods’ camera. And while this is happening, Krang’s computer is breaking into computer systems all over the City and taking control.

The City’s populace is in a state of panic as The Turtles “put out every little fire that erupts.” It looks like Krang will be victorious when Shredder plays back some footage that Frip shot on a planet with no gravity — everything starts floating away — including the Turtles. But when Shredder has the camera inadvertently knocked out of his hands, Frip retrieves it and turns it off.

While everything comes crashng back to Earth, Donatello successfully inserts a “bug” into Krang’s computer, thus destroying it and Krang’s hope of dominance.