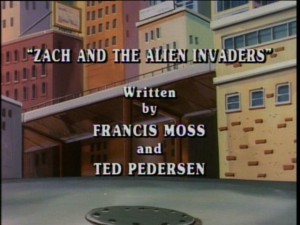 ZACH AND THE ALIEN INVADERS

Zach, the Turtles’ young friend, and honorary fifth Turtle, is infatuated with comic books, especially “The Alien Invaders”… but the boy has “cried wolf” once too often as he seems to see aliens everywhere.

Zach “retires” his Turtle costume when his parents enroll him in the Ten-Hut Military Academy where they hope he will learn some discipline and live in the real world.

Zach calls the police when Wingnut and Screwloose unleash a Robotic Cockroach onto The City, but they do not believe him. The only ones who might believe him are the Turtles, but he is captured before he can convince them that he is telling the truth.

It is not until the Robotic Cockroach starts attacking some construction workers downtown that Zach’s alien invasion story is accepted as fact and not fiction.

Michaelangelo and Donatello arrive at the Ten Hut Military Academy to rescue Zach only to find themselves in need of rescuing.

At the last minute, when Zach, Michaelangelo and Donatello are strapped in the Mind Changer, Zach uses his Turtle-Com to overload the power of the “Mind Changer.”

Defeated, Wingnut and Screwloose “beat feet” and Zach is honored as a hero by the city.