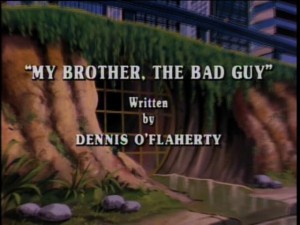 MY BROTHER, THE BAD GUY

In Tokyo, Japan, Shredder breaks into the Ninja Hall of Fame and steals the diary of the infamous Kojima Brothers and disappears back through the Dimensional Portal only moments before the police arrive.

Lt. Saki who just happens to be the baby brother of Oroku Saki, otherwise known as The Shredder, and a overzealous policeman, discovers Shredder’s fingerprints on the glass case that until recently held the sacred diary of the Kojima Brothers.

Once again, burdened with the family shame, Lt. Saki vows to find Oroku and arrest him. He travels to America where he encounters the Turtles at the local Nuclear Fusion Reactor. The Turtles are staked out at the reactor in an effort to protect the Super Magnet from being stolen by the Shredder.

The TMNT reluctantly join forces with the Tokyo cops when they learn that they’re after the same man, who was just spotted breaking into Acme Electronics. The Turtles soon become frustrated with Lt. Saki’s fervent respect for “law and order” — as he prevents them from breaking the law in order to apprehend the Shredder.

Meanwhile, the Shredder has created “solid” holograms of the Kojima Brothers — programmed “with the secrets of the three greatest ninja masters of all time,” to destroy the Turtles. While the TMNT are busy defending themselves from the holograms of the Kojima Brothers, the Shredder, along with Rocksteady and Bebop, has broken into the Nuclear Fusion Reactor. The Shredder’s plan is to harness the power of the Nuclear Fusion Reactor’s Super Magnet to pull the Technodrome through the Dimensional Portal and into the middle of the City. But before he can “pull the switch” Lt. Saki arrives and attempts to arrest The Shredder, only to find himself handcuffed to a drain pipe.

While the Shredder continues to try and pull the Technodrome through the Dimensional Portal, the Turtles arrive, rescue Lt. Saki, and once again join forces to kick the Shredder’s butt. But they can’t stop the Techndrome from leaving Dimension X and entering the Earth’s atmosphere. At the last minute, Donatello pushes a button which “re-alligns the polarity of its electrostatic impedence” and sends it crashing into the North Pole.