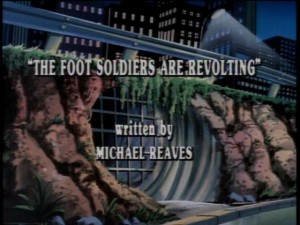 THE FOOT SOLDIERS ARE REVOLTING

When the Turtles go to the surface, they discover that Alpha One is on Earth with a Dimensional Displacement Device which he is using to transport all organic life to Dimension X.

Meanwhile, back in Dimension X, Krang and Shredder manage to find their way back to the Technodrome. When they get there, they discover all the people that Alpha One has transported. They immediately start transporting all of them back to Earth. Alpha One sees the people coming back through the portal and gets distracted because he doesn’t know what’s happening. This distraction allows the Turtles to take the wave modulator out of the Dimnsional Displacement Device. The Turtles turn the device against Alpha One transporting him to an unknown dimension. The Turtles then use the Device to transport Bebop and Rocksteady back to Dimension X where they belong.