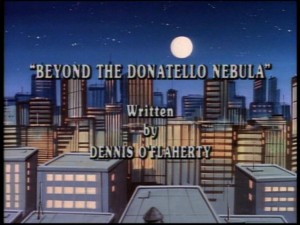 BEYOND THE DONATELLO NEBULA

Donatello has created a device to communicate with distant galaxies. While trying to communicate with the Turtle Nebula (a cloud of stars shaped like a turtle) Donatello accidentally brings a spaceship to Earth. The craft lands next to him, on the top of the Channel Six building. Out of the spaceship comes an alien lizard named Algernon. Algernon tells Donatello that his broadcast brought him to Earth and damaged his ship’s drive. Algernon insists that Donatello now fix it.

Meanwhile, the other Turtles are watching one of April’s broadcasts on TV. She is doing a story on Hiram Grelch, a greedy businessman who is trying to take over all the TV stations in the area. In the middle of her broadcast, Grelch’s hoods show up and kidnap April. Donatello and Algernon see this and rush to her aid, but the hoods get away and bring April to Grelch’s penthouse. When Donatello and Algernon arrive at Grelch’s penthouse they discover that he has a force field around it and they can’t get in. The duo head back to Channel Six to get a laser cannon from Algernon’s ship to blast through the force field. To their surprise, they discover that Grelch has stolen the spaceship.

After April’s disappearance on TV, the other Turtles set out to look for her. After having no luck, the lads decide to see if there is any news on April’s disappearance on the television. The three TMNT are surprised to find Donatello on the air! Donny has come up with a plan to hopefully free April and get Algernon’s ship back. He has Algernon change himself into a ferocious alien from the Turtle Nebula demanding his ship back. If it is not returned, the transmogrified alien will create interplanetary war! Using Grelch’s force field against him, Donatello broadcasts an alien invasion movie through his view windows. The broadcasts makes it appear that Earth is being invaded and Grelch decides to surrender. While Grelch is panicking from the “so called invasion,” Algernon and Donatello manage to get in under the force field and shut the power off to the building. The other Turtles arrive in the Turlte Blimp, battle Grelch and his thugs and free April.

Donatello finally discovers that the only thing that will fix Algernon’s ship is pizza. After taking some pizza from Michaelangelo, he waves good bye to the Turtles and returns home.