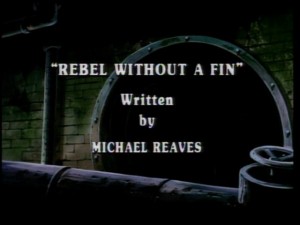 REBEL WITHOUT A FIN

Another mad scientist, Dr. Polidorius, creates a half-man half-fish named Ray. The Doctor has Ray plant explosives in certain parts of the sewer so that he can sink the city beneath the ocean. Ray is just one of the first fish-men that Polidorius plans on creating for his underwater city.

April, who is covering another Donald J. Lofty building opening, thinks that she sees one of the Turtles peeking out of a sewer drain and goes down to see them. When she gets another look at the person there, she realizes that it’s not the Turtles. While following it, she radios the TMNT to tell them what she saw. While April is talking to them, Ray captures her and brings her to the Doctor’s lab. The Turtles rush to her aid when they realize she is in danger. By the time that they get to where she is supposed to be, April is gone. While searching for her, the Turtles meet Ray. A battle ensues, but Ray’s arsenal of eel electricty and scorpion fish quills defeats our heroes.

The Turtles finally find April in the Doctor’s lab, but they end up getting captured and are unable to stop the Doc from turning her into a walking fish. The TMNT find out about the Doctor’s plans for his underwater city. The lads manage to escape from their trap, but Dr. Polidorius gets away. The TMNT rush to disarm all the bombs, but they run out of time and one goes off. The explosive that they miss is under the Lofty condos. The Turtles track down Polidorius with the help of April’s fish powers and make him change her back to a human again. Ray escapes into the sea before anybody can catch him and the Lofty condos are turned into an aquarium and underwater restaurant.