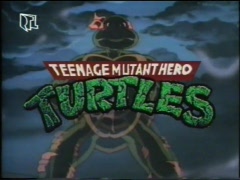 They’re the world’s most fearsome fighting teens,
(we’re really hip)
They’re heroes in a half-shell, and they’re green,
(hey! get a grip!)
When the evil Shredder attacks,
These turtles boys don’t cut him no slack!

Splinter taught them to be fighting teens,
(he’s a radical rat)
Leonardo leads, Donatello does machine’s,
(that’s a fact, chap).
Raphael is cool but crude,
(gimme’ a break!)
Michaelangelo is a party dude (Horray!)

When the series was pitched to the United Kingdom TV networks back in the late ’80s, we had to change the name from “Teenage Mutant Ninja Turtles” to “Teenage Mutant Hero Turtles” because censorship authorities there deemed the word “ninja” to have too violent connotations for a children’s program. Consequently, everything related to the Turtles had to be renamed before being released in the U. K. The lyrics to the theme song were also changed, eliminating the word “ninja” and changing it to “hero”. The U. K. censorship policies also had other effects, such as editing out Michelangelo’s nunchakus and generally toning down the usage of all the Turtles’ weapons.

At the start of the TMNT relaunch in 2003, the censorship policies in the U. K. had changed, and thus we were allowed to use the original “Ninja Turtles” title (and no content had to be edited from the new cartoon). As a result, in the U. K., the 1987 show is still referred to as “Teenage Mutant Hero Turtles” while the current series is called “Teenage Mutant Ninja Turtles”.